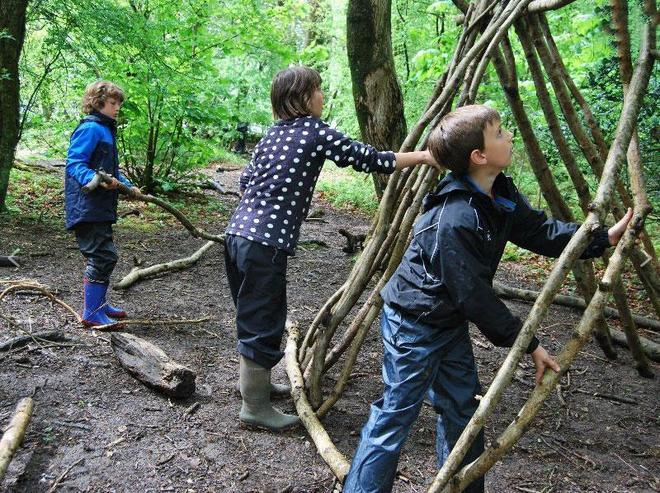 The earliest tangible evidence of a school at Bathampton dates back to 1804 with fragments of an embroidered picture of a lady in a garden, representing `Simplicity’, created by Mary Wilton a pupil at Bathampton School at the time.

The first existing logbook begins in 1863. We know that the school building was then near but not on the existing site. All the children were taught together. Their lessons consisted of Reading, Dictation, Arithmetic and Bible Classes. The children at school at that time being reported as ‘inattentive and noisy on occasions.’

Education was changing fast through the 1800s but children were still absent for long periods when they were needed, for example, in the nearby hayfields. Barges drawn by horses still used the canal, stage coaches, carriages and carts rattled over the canal bridge to The George, and steam trains regularly trundled past on their way to and from London.

By 1869 besides the Teacher there was also a monitor. The monitor would be taught by the teacher and would then teach some of the children. Although much of the children’s work was still done on slates using a slate pencil, they were beginning sometimes to copy work into copy books using pen and ink.

In 1871 the Infants moved to a separate room. Payment to the school was still by results in tests and attendance. In the days before the test, the attendance always improved as parents obviously wanted to keep their school.

In 1876 education became compulsory, but just a year later the school was closed for a month due to a Measles epidemic and sadly two children from the village died from contracting the disease.

In 1882 the School was closed due to severe flooding in the village.

By 1884 there were 64 children at the school. In the next year, by paying one penny a month, children could borrow a library book.

During all these years the children had continued to work on slates, only using paper or copybooks occasionally.
In 1890 a new gallery was built and the children had new desks, the first recorded remodelling exactly one hundred years before this major remodelling in 1990.

During the early 1900s period the new school was built in typically Victorian style with its main galleried classroom, its two smaller classrooms and the outside toilet block. playtime the boys and girls played in separate playgrounds divided by a high wall.

The next log book starts in 1923 with 42 children. In that year, nearly 25 years after it was built, the School House was repaired and decorated.

A new illness is noted in 1927 was a `flu epidemic’, which caused nearly 50 children to be absent.

In 1936, the year in which the old King George died the Wireless or Radio was used in school for the first time.

In the following year, 1937, the final gallery was removed and new furniture bought for the school. Children stayed at Bathampton until they were 14. Life in school became more fun with Maypole Dancing, a Fancy Dress Competition. However, the fun was short lived. The Second World War had begun.The children in Bathampton would have been issued with gasmasks and food was rationed. The school received 48 evacuees who were put into two classes and taught separately from the rest of the children. They were not merged with Bathampton children for a year.

Because many were away at war, children from school helped with lifting potatoes in the fields, just as their predecessors had done 50 years before. Because of the air-raids on Bath, many people were homeless and the school was used as an emergency feeding centre. Children arrived at school one day in 1942 to be sent home as a stray unexploded bomb was lying near the school. Besides feeding air raid victims, the school also became a clothing centre, collecting and distributing clothes to those made homeless by the bombing.

In 1944 the new Education Act changed forever education in this country. Children now stayed at school until they were 15 years old. During this year, and in spite of the war, the new canteen was built at the back of the school.

In 1951 a new Headteacher, Mrs Kendall, was appointed to replace Mrs Oakey. She was to remain Headteacher for 21 years.

The increase in numbers in the post war years meant that extra accommodation was needed, and in 1956, 60 years after the school opened, a Pratten hut appeared in the playground.

At the end of the 1950’s with 135 children in school, conditions were cramped. Many children were absent with Scarlet Fever and Mumps.

In 1960 the children, for the first time, used King Edward’s Playing Field for games.

The school subjects were expanding in the 1970’s. French was being taught, and so many children had bicycles that Cycling Proficiency Classes were started.

In 1972 the school expanded again when the new Elliot caravan classroom was positioned on the old station master’s garden. Mrs Kendall, retired.

Her place was taken by Mr T. Collier. The school leaving age was raised to 16, although Bathampton had long since become a Primary School, with the children leaving at 11. During the next seven years the highest number of children was 161 in 5 classes.

Until 1972 the School House had been occupied by the various Headteachers but it was then let to other occupants. Towards the end of the 1970’s the numbers were rapidly dropping and teachers took early retirement, or moved elsewhere.

In 1979 Mr Collier moved to another Headship and Miss Grayson took over as Headteacher.

The school had 5 classes and 126 pupils at this time. The Alpha/Beta Maths Scheme was in use and various Reading Schemes including Janet and John and Reading 360.
Swimming instruction was carried out for one day a week in the school pool, and two evenings were organised for recreational swimming. In 1979, for the first time since it was built, the largest room became a Hall without a resident class.

In 1983 computers were used in the school for the first time.

By 1985 the school again had 4 classes and was redecorated throughout. This year saw the election of the first Parent Governors.

A live issue in 1988 was still the proposed remodelling. The Education Reform Act was aimed to make sure that children were being educated for the 21st Century.

At last, in January 1989, it was learnt that the remodelling was to go ahead and by March the office had been emptied.
A further `flu epidemic’ hit the school in late 1989. Only 26 children out of 95 were not affected.

On June 11th 1990 the official re-opening of the remodelled school took place preparing the school, pupils and staff well for the forthcoming decade and the advent of the new millennium.

Unfortunately not the ones with chocolate chips.

Some cookies are necessary in order to make this website function correctly. These are set by default and whilst you can block or delete them by changing your browser settings, some functionality such as being able to log in to the website will not work if you do this. The necessary cookies set on this website are as follows:

Cookies that are not necessary to make the website work, but which enable additional functionality, can also be set. By default these cookies are disabled, but you can choose to enable them below: