We are the first Primary school in the West of England to achieve Gold Modeshift Stars status! 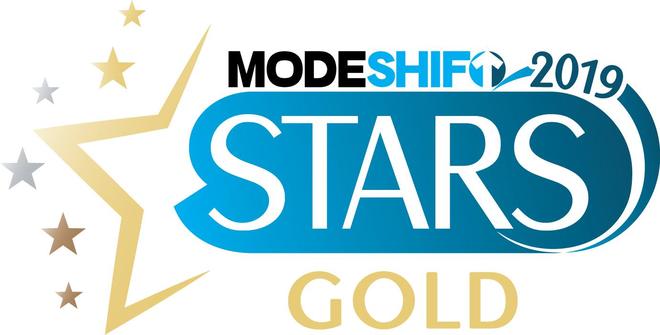 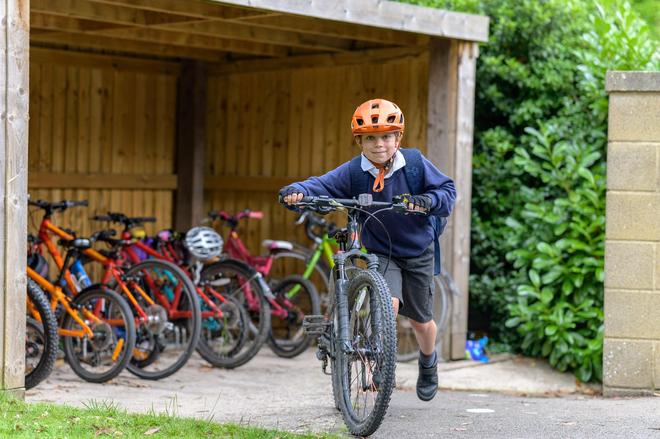 At Bathampton Primary we encourage families to travel actively to school wherever practical – by bike, scooter or on foot. We understand that there are lots of improvements that could be made to safety for pedestrians and cyclists on the roads on the way to school and are lobbying hard to make these happen.

The Safer Routes to School Group is run by parents who have children of different ages at the school with regular input from both school management and children. We visit the school council at least annually to include members in our working group – we ask for feedback from pupils about our plans and for help with our ‘hands-up’ pupil travel surveys.

In Autumn 2019 we were asked to present our approach and priorities to the local Bathavon North Forum. The slides for the event give a summary of where we are currently and what we do.

In 2017 we started to feature on the agenda for the full governing body meeting and were really pleased to have questions included for the first time in the school’s annual summer survey for parents and pupils. These inputs help us check that we are heading in the right direction. As a result, we have a school Active Travel policy.

We record our activities on a school travel plan that is hosted online by national accreditation organisation Modeshift Stars. The council is asking all schools to record their plans in this way so that there is consistency of approach.

Modeshift Stars gives us the chance to apply for awards and so far Bathampton Primary has achieved its Gold award, which we received in August 2019. We are delighted to be the first school in the West of England to achieve this level of award and also to be B&NES primary school of the year for active travel in both 2018 and 2019.

What are our road safety priorities for improvement?

We carried out a detailed parent survey in June 2016 to help us set priorities for improving safety on the roads on the way to school.

The response was clear – parents were most concerned about crossings on the canal bridge, from the George and outside school, followed by safety on fast local roads (Mill Lane and Warminster Road).

We check in each year to make sure these haven’t changed. Broadly they haven’t, as investment in road improvements is a long-term project, however we have since added the need for a pavement along the single track part of Tyning Road down to the path to Bathford/new housing development.

We are making positive progress and are grateful for the support of both the Parish & Ward Councillors, as well as B&NES Highways.

Parents generally respond brilliantly to the request to completely avoid Church Close and Tyning Road and use the George car park instead. It’s is fundamental to our school community’s safety that everyone uses the George for parking. 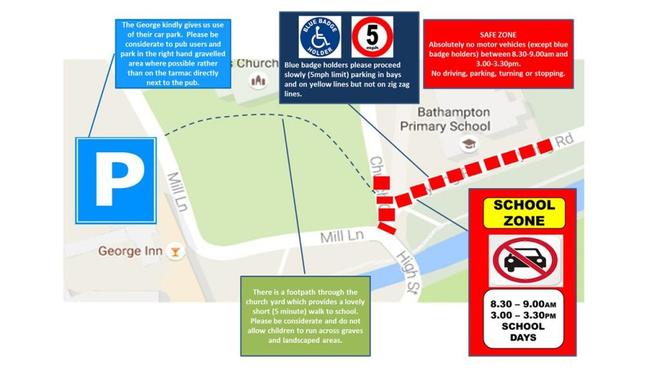 The Safe Zone is in our gift to make happen as it is part of how we organise ourselves as a school community.

We were very grateful to have £40k awarded to safer routes as part of the 2017/18 Council budget. This has been spent on widening the pavements on Mill Lane that previously had narrow stretches that didn’t allow parents to walk safely next to their children, especially if also pushing a buggy.

We continue to press for a more formal crossing at the George. The location doesn’t meet Highways key criteria for a zebra crossing in terms of land ownership and space available, but we are undeterred and have an assurance from the Council that they will work with us to do more with regards to visibility and warnings than the raised table that exists today. In the short-term the Council has put down large road warning stickers either side of the raised table and has moved the flashing sign opposite the George that sent a confusing message to drivers coming from Mill Lane. More is still needed.

We successfully lobbied for resurfacing of all buff surfaces at key crossings around the school area in Summer 2021.

In August 2021, B&NES received confirmation from Highways England that there will be a better crossing for the A36 - this process will take several years.

In the same month, together with the Parish Council, we submitted a joint application to the B&NES Liveable Neighbourhood scheme to improve crossings on Down Lane with Devonshire Road and Holcombe Lane. This bid is now being extended to become the focus of solving both the canal bridge safety issues and also improving safety and the environment through the High St and up onto Down Lane. In Spring 2022, the Parish Council will facilitate a consultation on the proposals

Since 2017 we have been trying to permanently solve safety issues on the canal bridge - a whole community effort including local businesses, bodies, donors and fundraisers. We have done this as we recognise that a crossing patrol is not a permanent solution to a wider community safety issue.

We have been very fortunate indeed to have an engineer parent and broader group of planning professionals work with the school and an offshoot group, the Bathampton Conker Crossing, to design for a new pedestrian bridge. This design obtained Planning Consent on 25th February 2019 and B&NES Highways took responsibility for the next phase of the project – detailed design and costing.

However, as of the start of 2022, the council decided that they would not be able to find a fund for the capital needed to build the bridge. Instead, they remain committed to solving the safety issue and are looking first instead at a Liveable Neighbourhoods bid to use traffic signals that build on the learnings of temporary lights during Cleveland Bridge closures. While we had been specifically steered away from lights back in 2018, we support trying to learn from recent months to find a long-term solution for us as a wider community along the length of the LN route.

Unfortunately not the ones with chocolate chips.

Some cookies are necessary in order to make this website function correctly. These are set by default and whilst you can block or delete them by changing your browser settings, some functionality such as being able to log in to the website will not work if you do this. The necessary cookies set on this website are as follows:

Cookies that are not necessary to make the website work, but which enable additional functionality, can also be set. By default these cookies are disabled, but you can choose to enable them below: